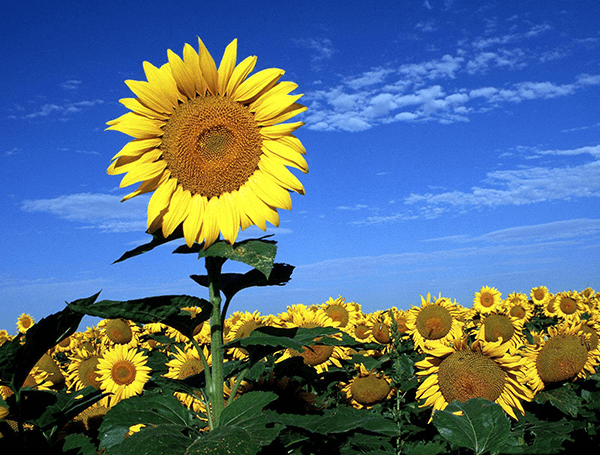 Elecampane is a large beautiful plant with leaves that are similar to the downy leaves of great mullein. The flowers look like small sunflowers. They are bright yellow, about 4 inches in diameter, and bloom mid to late summer. The sturdy, deeply furrowed stem rises from a basal rosette of large, ovate, pointed leaves. Elecampane reaches a height of 3-6 feet; often found growing in hedgerows. The lower stem is hairy, becoming sparsely branched and downy at the top. The root, the part that is used medicinally, is a thick cylindrical branched rhizome that is yellow on the outside but white inside. It has a warm bitter taste and a scent which is said to resemble violets in bloom.

From July to September.

It is found growing wild in damp meadows, wet-mesic pastures, old fields and roadsides. It prefers a moist, well-drained clay loam in a damp, partly shaded environment and is easily grown from seed and from cuttings.

The medicinal part of the plant:

The root, gathered in spring and autumn. The leaves and flowers during flowering time.

Elecampane was once listed in the U.S. Pharmacopeia and has been long valued as a tonic herb for the respiratory system. It was used traditionally as a specific remedy for chronic bronchitis and bronchial asthma. It was thought to soothe the bronchial tube linings and act as an
expectorant. Inula helenium is believed to be useful in any respiratory condition which produces copious mucous discharge and it is specifically indicated in the irritating cough of bronchitis, especially in children. Inula helenium was traditionally used to treat the cough of pulmonary tuberculosis. Research has shown that the volatile oil is active against the tubercle bacillus. The volatile oil stimulates the mucociliary escalator and circulation, while the saponins stimulate the removal of mucus from the lungs. The constituents alatolactone and other related compounds have expectorant, secretolytic and antitussive actions; these have also demonstrated antibacterial and antifungal qualities. For the treatment of respiratory problems, elecampane combines well with marribium, tussilago, asclepias and achillea. It is a traditional remedy for worms; the constituent alantolactone has been used as an anthelmintic in the treatment of roundworm, threadworm, hookworm and whipworm infestation. Chinese research has demonstrated a mild antibacterial action of the herb as well as a stimulating effect on the nervous system, digestion, and adrenal cortex. Elecampane is used as a flavoring agent in digestive liqueurs and vermouth, it is used in candy and is often added to cough tinctures and pastilles. Although elecampane is considered a valuable herbal remedy for many conditions, occasional allergic reactions may occur. It should not be used during pregnancy.