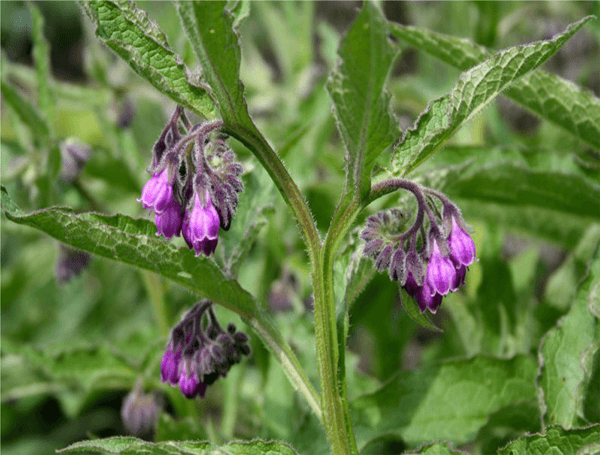 Comfrey is a plant indigenous to Europe and temperate parts of Asia. It has been suggested that its use can be dated back to 400 B.C.It has had various uses, not only as a medicinal herb but also as food and drink.

Comfrey grows well in moist soils, producing a thick hairy stem, reaching between 2 to 5 feet tall. It displays flowers in dense clusters that range in color of dull purple, blue or white. Inside the root, it is fleshy and white and filled with juice, while the root is black on the exterior.

It is the compound found in comfrey roots and leaves, called allantoin, that is the ingredient of interest. It has been suggested that allantoin helps to grow new skin cells, and has the ability to regenerate connective tissues. Comfrey also contains rosmarinic acid and tannins that help skin grow. Other helpful ingredients and compounds found include hydroxy cinnamon acid derivatives, as well as mucopolysaccharides. It is rich in protein, antioxidants and vitamin B12. Commonly, capsules with the extract, contain whole-leaf comfrey. While both the roots and the leaves are used in herbal remedy preparations, the roots and the new leaves have a greater concentration of the poisonous pyrrolizidine alkaloids. The roots have the highest, 16 times the concentration of the leaves. Most capsules containing comfrey usually contains whole leaves.

Comfrey has traditionally been used a folk medicine for a variety of ailments, such as the topical treatment of painful muscles and joints, to aid the healing of wounds and skin cells, haematoma, broken bones, fractures, gangrene, inflammation, burns and sprains, bruises, gout. It has also been taken internally for rheumatoid arthritis, colitis, stomach and digestive problems such as diarrhea, gallstones, and also pneumonia and pleurisy, and ulcers.During World War I it was used to help heal maggot infested wounds. More recently, in the twentieth century, some medical professionals have tried to treat cancer patients with comfrey but as yet no scientific evidence has been found to confirm its usefulness in that regard. These days, it remains a very popular herb because of its ability to heal tissue and other wounds so quickly. It is not recommended for deep wounds because it may heal the outer tissue quicker. It can be beneficial as an herbal remedy for burns, bruises, and other superficial wounds. Its success has been in its use as a topical treatment. When used in low concentrations comfrey has been used in beauty creams and treatments. The fluid secretions of the plant called the mucilage have been used for healthy skin, soothing and softening it, and due to the allantoin, skin cells are regenerated also. Allantoin has also been found in other supplements as it is considered quite safe because it has been found in the human placenta and breast milk. When in ointment form, a common therapeutic use for comfrey is the treatment of pain and inflammation, due to the ingredient of rosmarinic acid. In regards to acute upper and lower back pain, a study by Giannetti in 2010, the root extract of comfrey was found to have a potent and clinically significant effect in reducing pain in the back.Previously a study by Koll in 2004, found during several clinical trials that comfrey was effective in the treatment of strains and sprains and various other joint and muscle complaints. It has also been noted that comfrey ointment is beneficial in the treatment of osteoarthritis of the knee because it decreases pain, and movement and quality of life are improved.