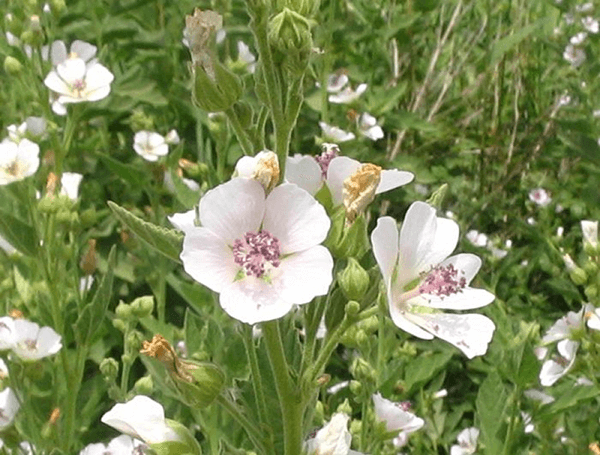 Marshmallow root is native to Europe. It has been brought to America recently as a plant of medicinal uses. It thrives in an environment of dark and salty marshes.

The marshmallow plant is a perennial which has a height that can vary between two to four feet. The color of the flower itself is a pink or light pink variant or that of a pale gray. The flower is about 1 to 1 and a half inches in length and blooms in the fall months of August through October. They are round with unusual toothed margins and three to five lobes. The roots are a pale yellow, tapered, lengthy and thick.

The flowers of the marshmallow root are used to make expectorant syrups. They are picked when the flower has matured to at least two years old, and in August just as the flower is coming into bloom. The root it exhumed in the late fall; cleaned of root fibers and corked and desiccated immediately.

Marshmallow root has a long history dating back thousands of years as an herbal remedy for cough, sore throat and other respiratory problems such as bronchitis and whooping cough (pertussis). This is due to the large amounts of mucilage found in the flower as well as the root.
Recommended uses include that of diarrhea and indigestion; along with chronic diseases that cause these such as Crohn’s disease, irritable bowel syndrome (IBS) and Gastroesophageal reflux disease. Weight loss has been promoted when taking marshmallow because it swells when mixed with fluid, prompting the stomach to have a feeling of more fullness. This herb has shown to be helpful in almost all problems related to inflammation of the digestive tract; including peptic ulcers, hiatus hernias, mouth ulcers, enteritis, and colitis. External uses have shown to be very effective as well. Laboratory tests from the 1960’s concluded that marshmallow root has anti-inflammatory activity on the human tissue indicating that this herb could be helpful in treating cuts, scrapes, and other wounds, as well as a remedy for eczema, psoriasis and pinkeye. Marshmallow roots form an imperative ingredient of ointments and creams that are effective in curing boils and other bodily abscesses.