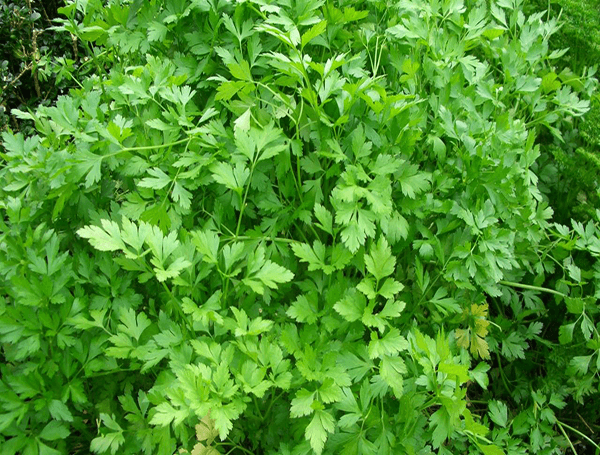 Originally, parsley was probably endemic to Southwest Asia and the Mediterranean (Turkey, Algeria, Sardinia, and Lebanon). The herb has been cultivated since ancient times and was early on widely grown in most parts of Europe. Today, the plant is extensively used as a spice and cultivated all over the world.

Parsley is a biennial plant belonging to the Apiaceae family (the celery, carrot or parsley family). Parsley is easy to grow, and even though it is a biannual, it is usually grown as an annual because in its second year it uses all its energy to form stems, flowers and seeds, leaving the leaves small and bitter and not very suitable for consumption. Parsley can grow up to 30 to 60 cm in height. The tripinnate leaves are curly and shiny and sit on bare stalks. The yellowish-green flowers appear on long hollow stalks. The seeds that follow after flowering are small and round shaped. The taproot is sweet and fleshy and not unlike wild carrot.

The whole plant is utilized either as medicine or food. The leaves are used fresh or dried as a seasoning and garnish while the root and seeds are primarily used as herbal medicine. An essential oil is produced by steam distillation usually from the mature seeds but it is also possible to extract essential oil from the leaves and root. The oil is colorless or yellow or brown-green with a rather strong and spicy flavor. The parsley leaves are best during the plant’s first year and they can be picked at any time during the growing season. The leaves can be dried or kept frozen for later use. The root is collected in the autumn in the first year or in the spring of the second year of the plant’s life cycle. It should be used fresh, but can also be stored as other root vegetables, preferably in a cold place. The seeds are collected in the fall of the plant’s second year.

Parsley contains flavonoids (apiin), glucosides, phthalide, furanocoumarins, carotenoids, vitamins A, B1, B2, B3, B5, C and E, and minerals such as iron, potassium, calcium, magnesium, phosphorus, selenium, sulfur, copper and manganese. All parts of the plant contain an essential oil but the seeds contain the highest amount (2-6%). The composition of the oil can vary, depending on where the plant is grown. The Roman physician Galen (130 AD – 200 AD) prescribed it for “falling sickness” (epilepsy) and as a diuretic in the case of edema and
Pedanius Dioscorides (40 – 90 AD), a Greek physician and botanist, describes the herb as a diuretic and as a remedy for irregular menstruation. The German writer, composer and philosopher Hildegard of Bingen (1098 – 17 September 1179) recommended compresses of parsley to treat arthritis and that the herb should be cooked in wine against chest pain. Over the centuries the herb has been used traditionally to treat various ailment and diseases. Externally, the herb was used to treat insect bites, injuries and get rid of lice, and internally as a treatment for dysentery, gall stones, and jaundice. Parsley seeds were even used as a remedy against the plague and once it was used as a replacement for quinine to treat malaria. In the 1800s and 1900s, parsley was listed in Pharmacopoeias as a laxative and as a diuretic agent that could be used as a treatment for kidney problems and edema caused by heart failure. The essential oil has a high content of apiol (phenylpropanoid ), myristicin, apiolin, pinene and other substances. The medicinal properties of parsley are largely due the substances apiol and myristicin.
Parsley is rich in minerals such as iron, magnesium, calcium, potassium, zinc, and phosphorus. It also contains high levels of folic acid (B vitamin) and the vitamins A, B, C, and K. Studies have shown that vitamin K is vital in bone formation, protects against osteoporosis and is
very beneficial for the circulatory system and the nervous system. Five grams of parsley usually covers the daily requirement of vitamin A, and 25 grams of the fresh herb cover the daily requirement of vitamin C. Parsley is an excellent source of dietary fiber but also calcium which makes it a good chose for those who are not very keen on consuming dairy products.